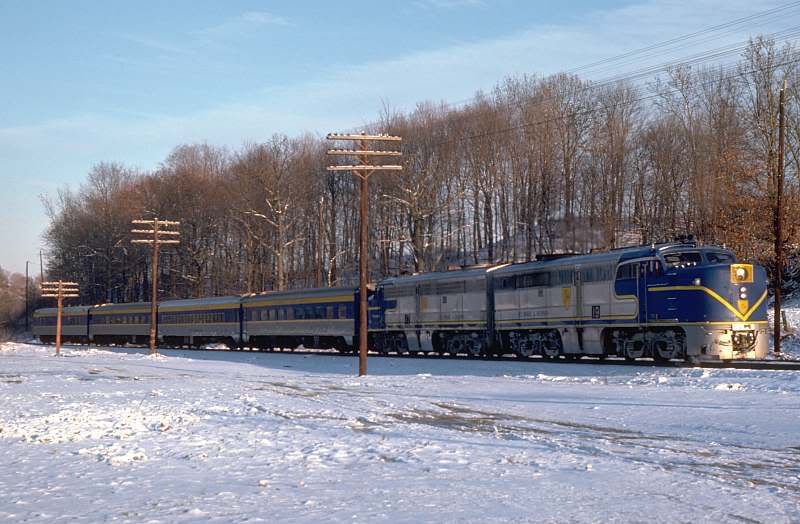 The recent PBS television show "Streamliners" was primarily devoted to the California Zephyr, an early stainless steel passenger train that ran between Chicago, IL and Oakland, CA. In the east, and not mentioned in the TV show, the Boston and Maine railroad operated a very similar train. In its later service with the railroad, it was operated as The Cheshire between White River Jct., and Boston. The train traveled the B&M Cheshire line from Walpole over the arches in Keene, down through Winchendon and on to Boston. This train is presently undergoing complete historic restoration at the small CCRR shops in Claremont, NH.

Amtrak took over the operation of many of the surviving long distance American passenger trains in 1971. Though not mentioned on the PBS show, a few railroads continued to operate their own passenger trains well after the final run of the California Zephyr. In a 1974 funding agreement involving Amtrak and New York State, the Delaware and Hudson Railway rebuilt ageing locomotives and passenger cars for service between New York City and Montreal on a train to be called the Adirondack.

Though newer turbine-powered Amtrak equipment would eventually replace this train, this revival of the streamline era delighted rail enthusiasts nation wide, but none more than those who lived in the Empire State. Built by the renowned American Locomotive Company in Schenectady, the PA-1 locomotives were decked out in a paint scheme that strongly resembled that used by the New York DOT. Another source of pride was that the Delaware and Hudson Railway, headquartered in Albany, was operating in the black at the time of the Adirondack's introduction.

The train's routing along the east shore of the Hudson River was magnificent. North of the Capital District it continued to Montreal along the west shore of Lake Champlain, often within sight of the big lake. In the accompanying wallpaper photo, the Adirondack is seen west of Mechanicville, NY northbound around 2:00 PM with Saratoga Springs as the next stop.

Today, virtually everything in this picture is gone. The PA-1 locomotives were sold to an operator in Mexico, the rails have been removed from the roadbed, and the Delaware and Hudson Railway is a name now relegated to railroad history.