This substantial northbound train was photographed at Edison,NJ on 13 May 1992 at 7:05 PM. Locomotive 608 is
a GE E60 built in 1975, producing about 6,000 HP. The train appears to include sleeper cars, indicating this
train is likely a Miami-New York job. 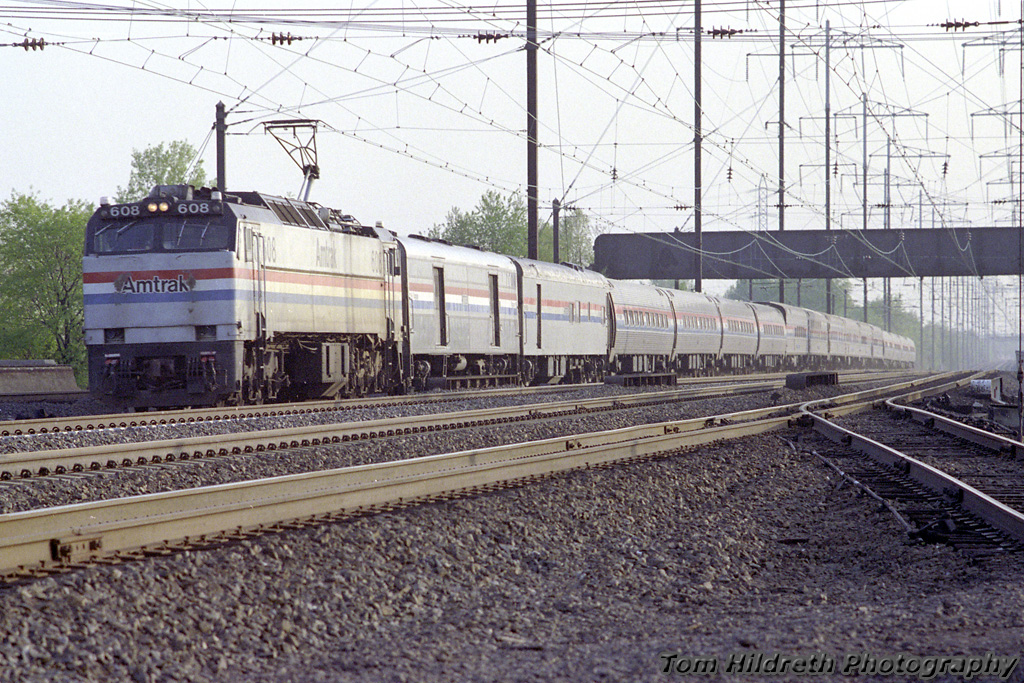 Amtrak train #448 the eastbound Chicago-Boston "Lake Shore Limited" has descended the east
slope of the Berkshire foothills and was cruising through Huntington, MA., when photographed on 26 January 1987. 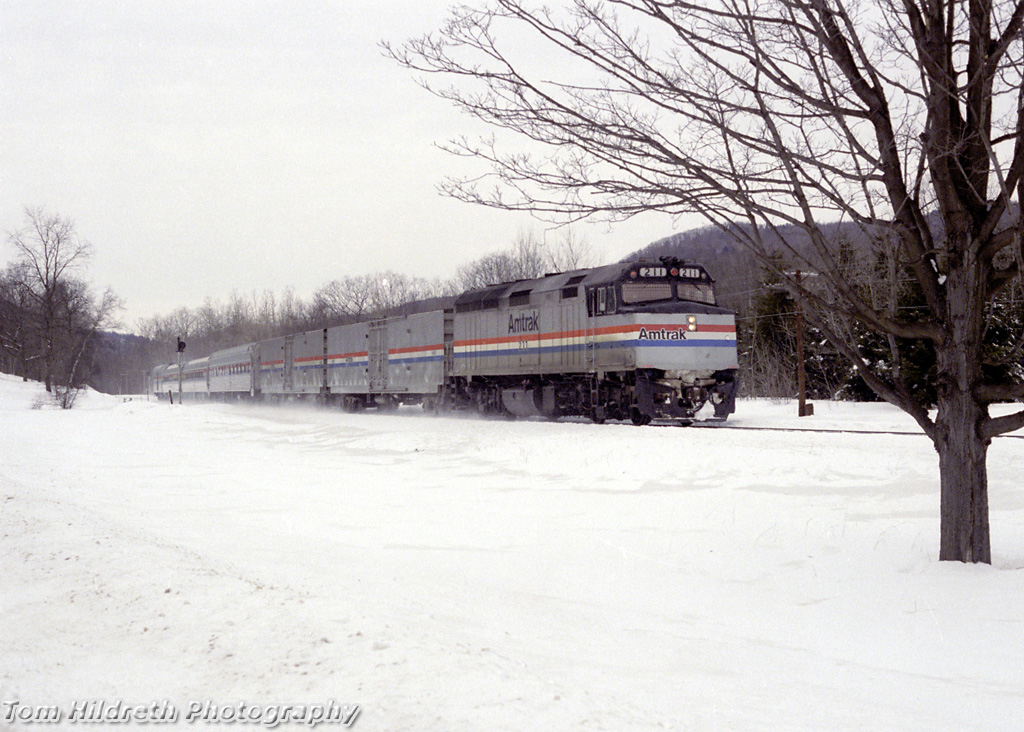 Amtrak train #61 "Montrealer" running late through the B&M yard at Springfield,MA, on a cold day in 1977. The leaking
steam coming from the three E8 locomotives indicates the older passenger cars on this train are still made comfortable by
traditional heating methods that hail back to the days of steam locomotives. 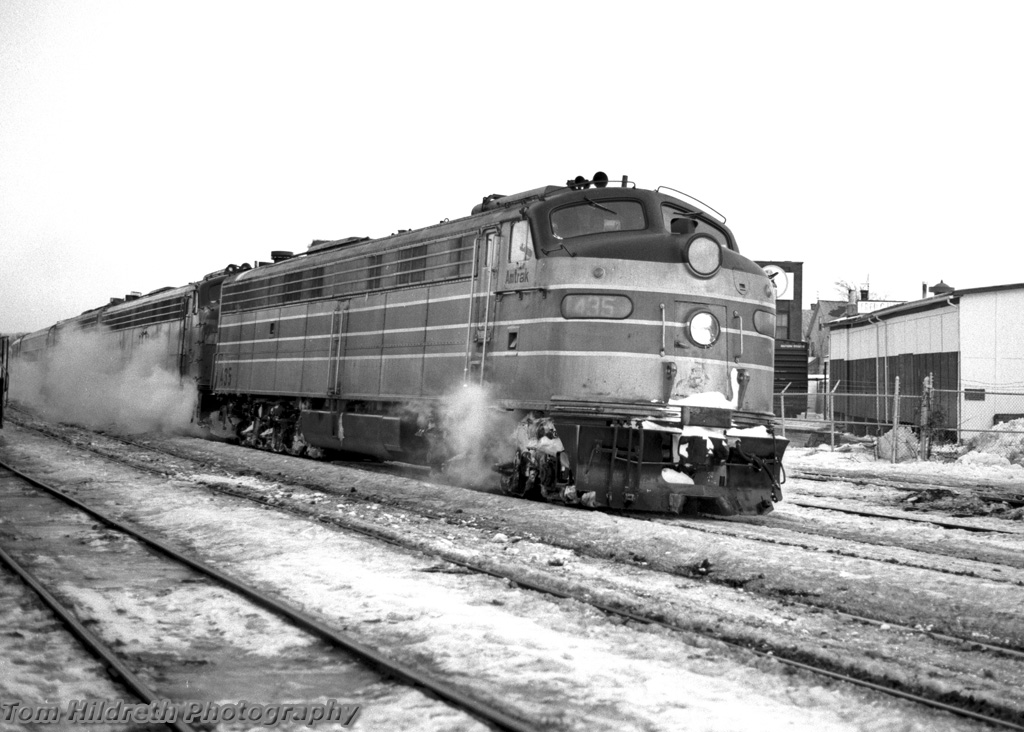 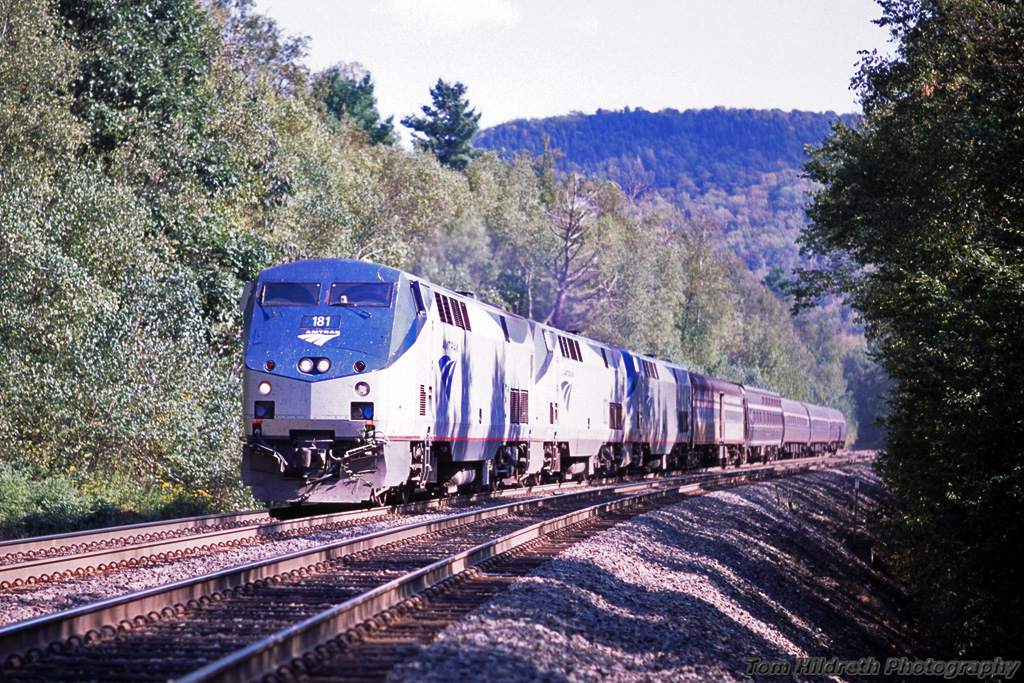 The northbound "Montrealer" on a detour via the Green Mountain Railroad offers its passengers
a view of the Black River valley north of the ski town of Ludlow, Vermont on 18 April 1982. 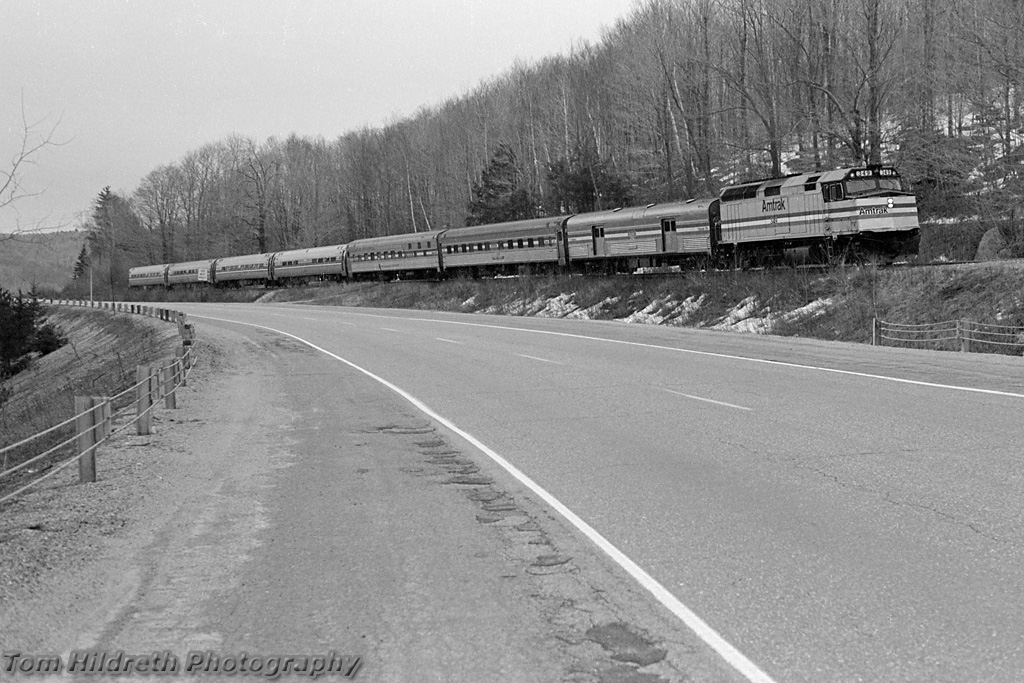 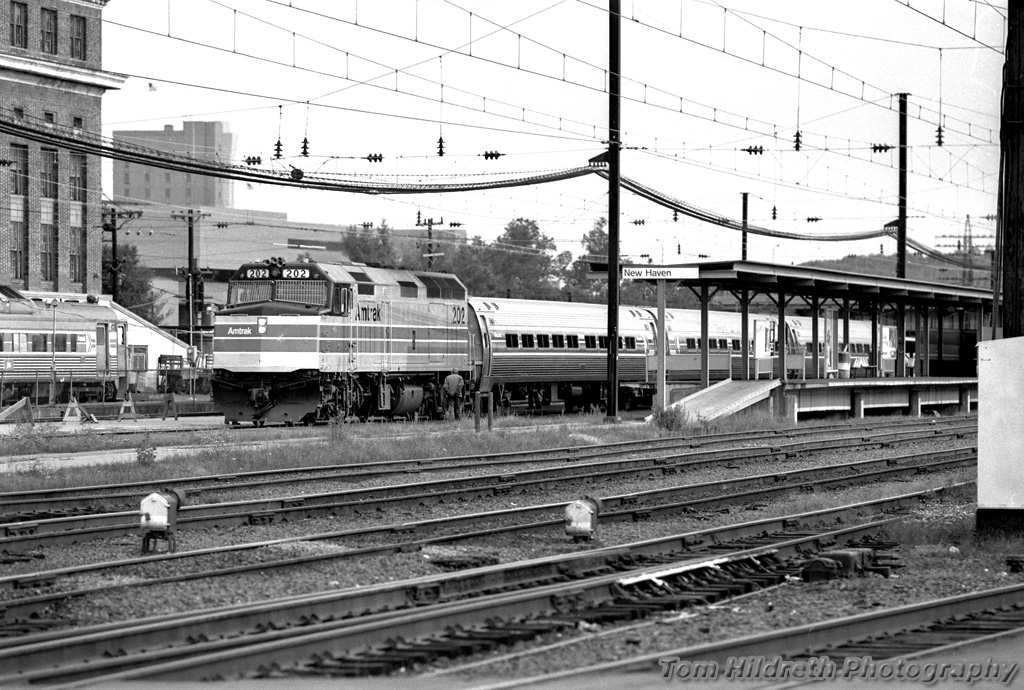 Amtrak #449 "Lake Shore Limited recieves running orders the old-fashioned way, with an operator
manually "hooping" the paperwork up to the train crew by hand at Westfield, MA 17 June 1977. 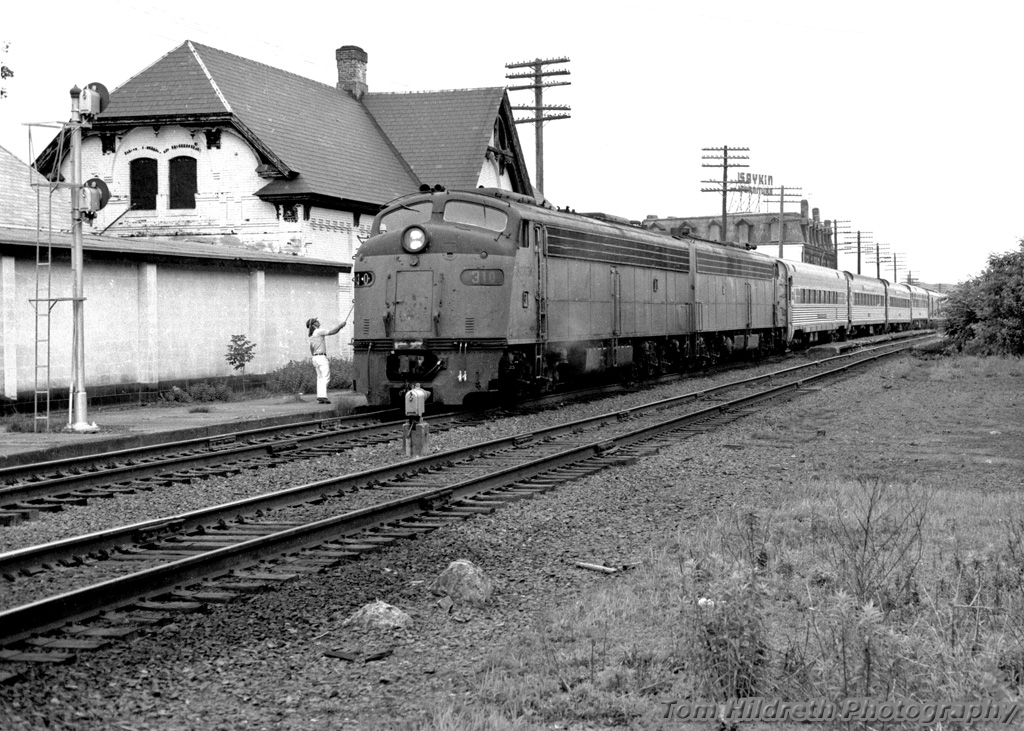 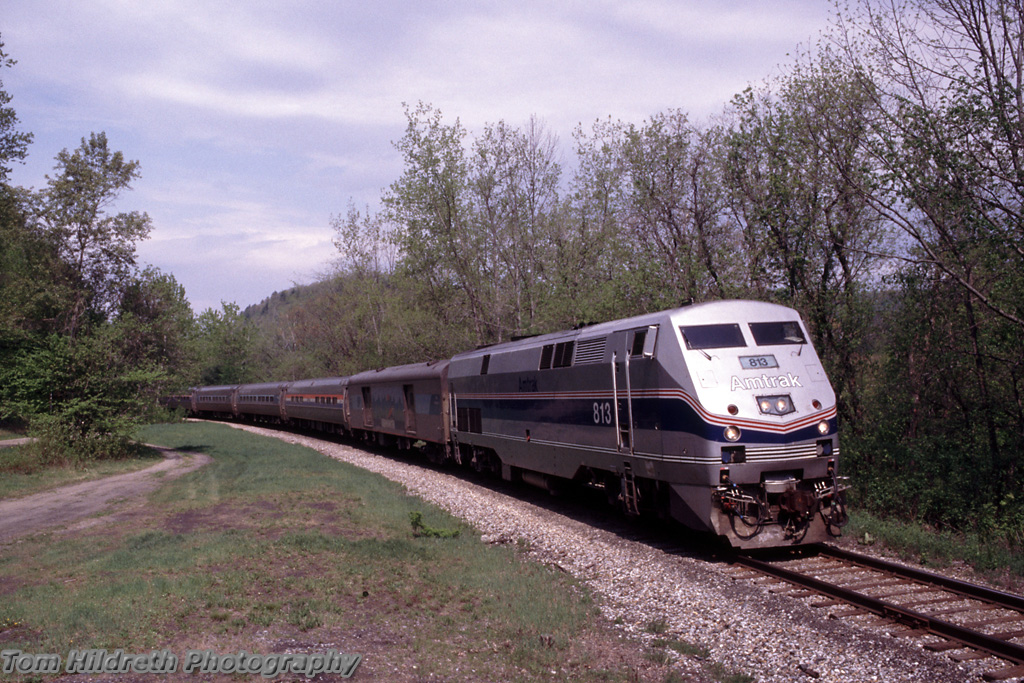 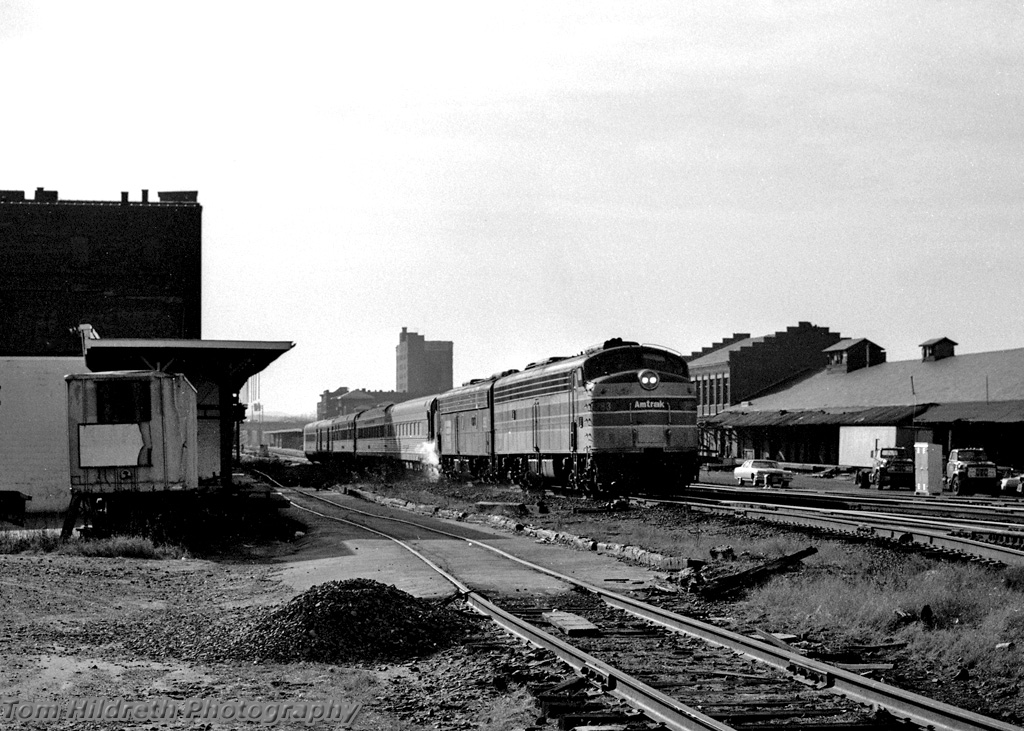 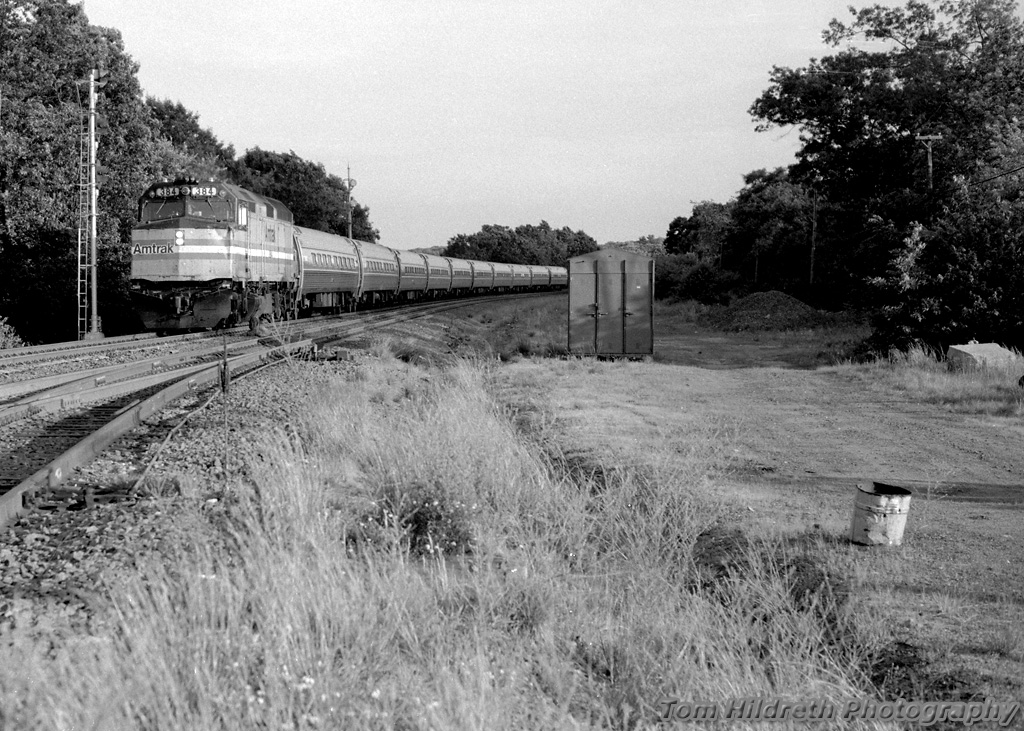 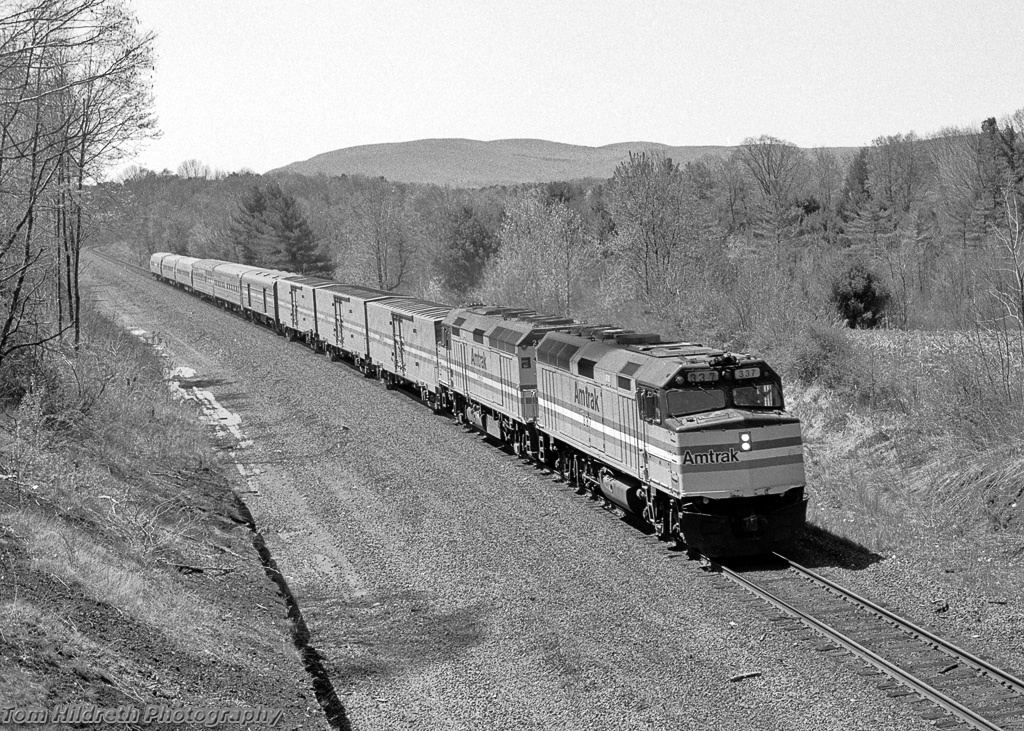 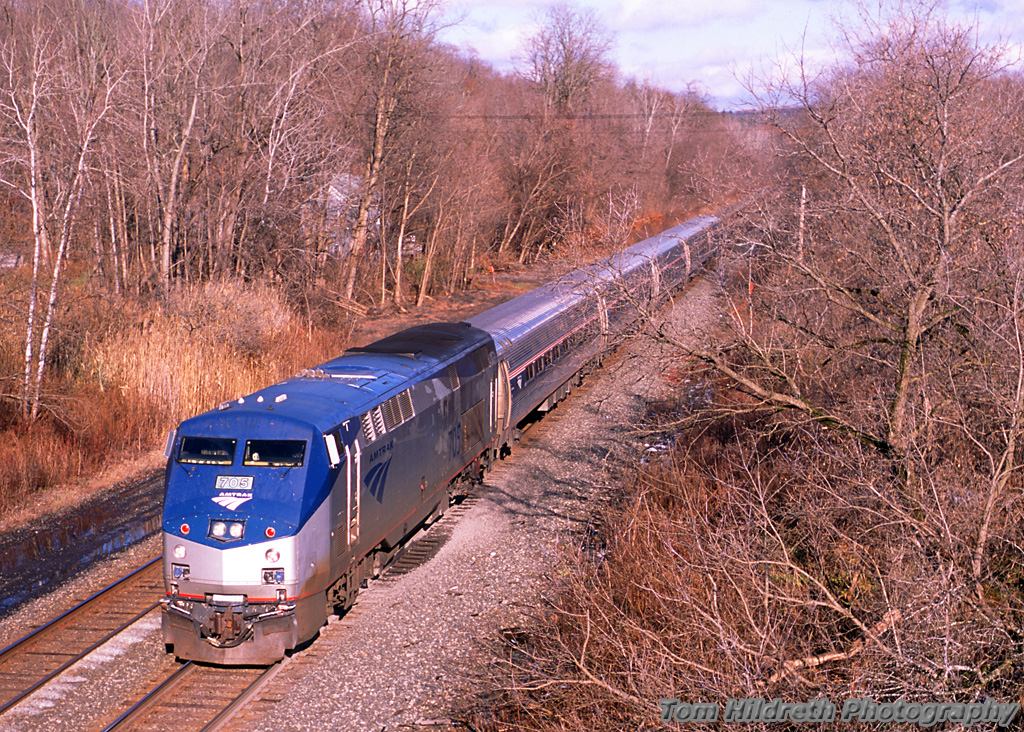 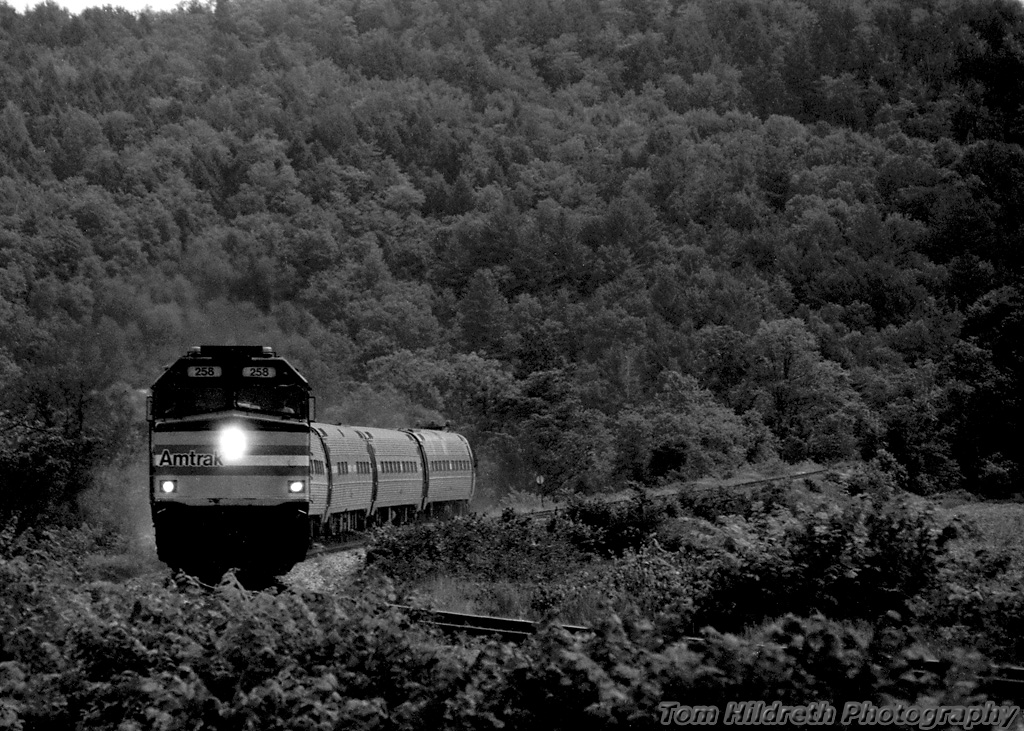 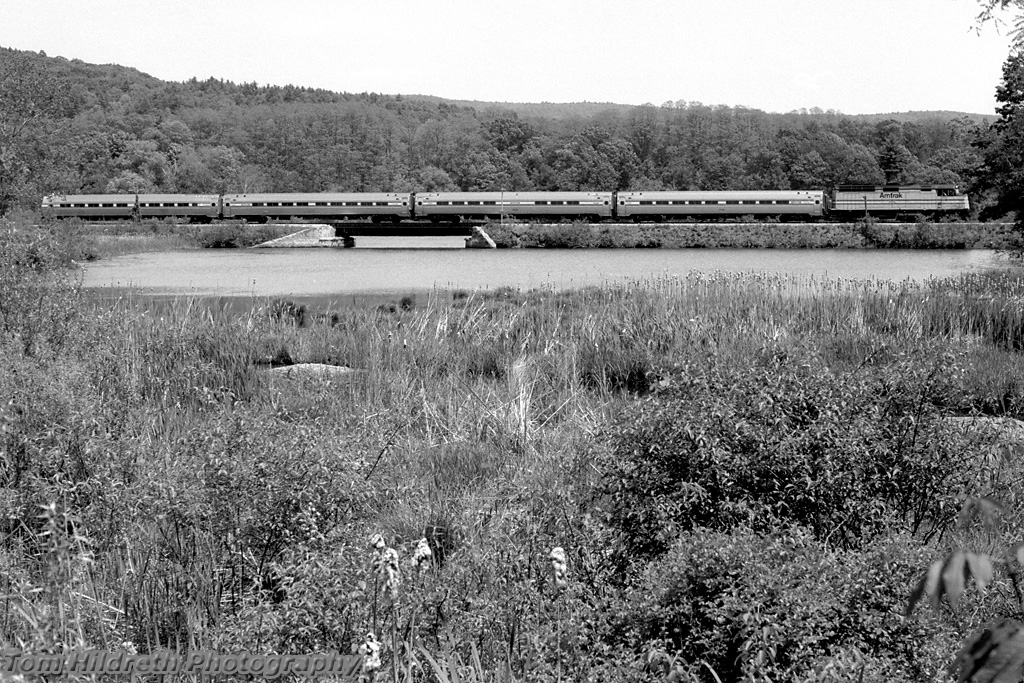 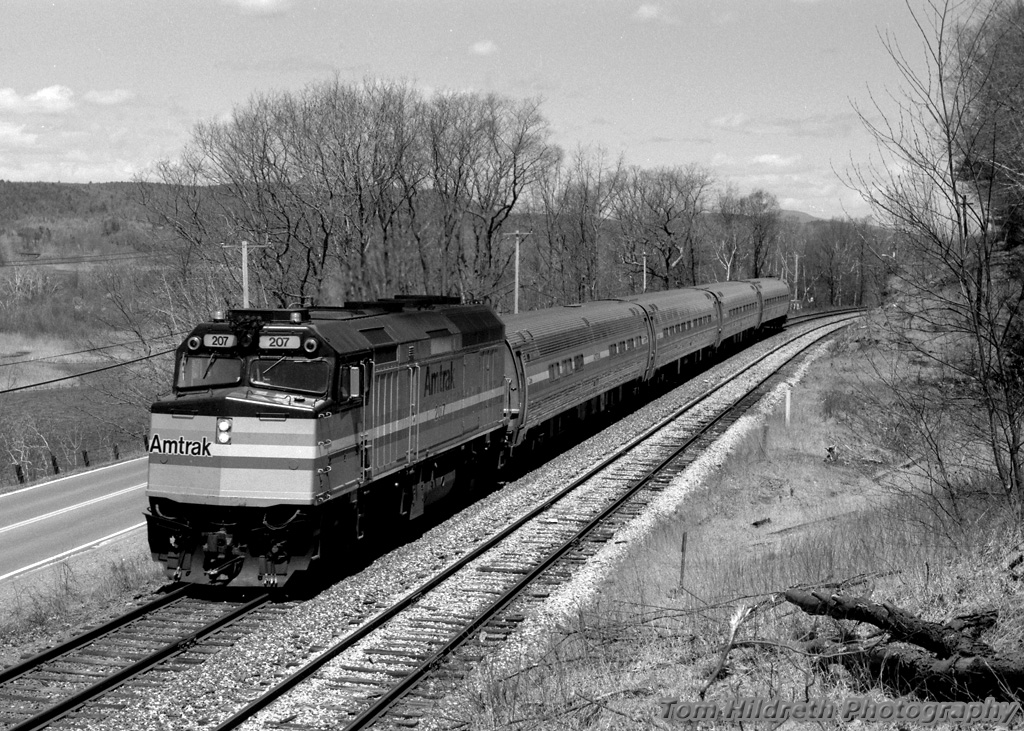 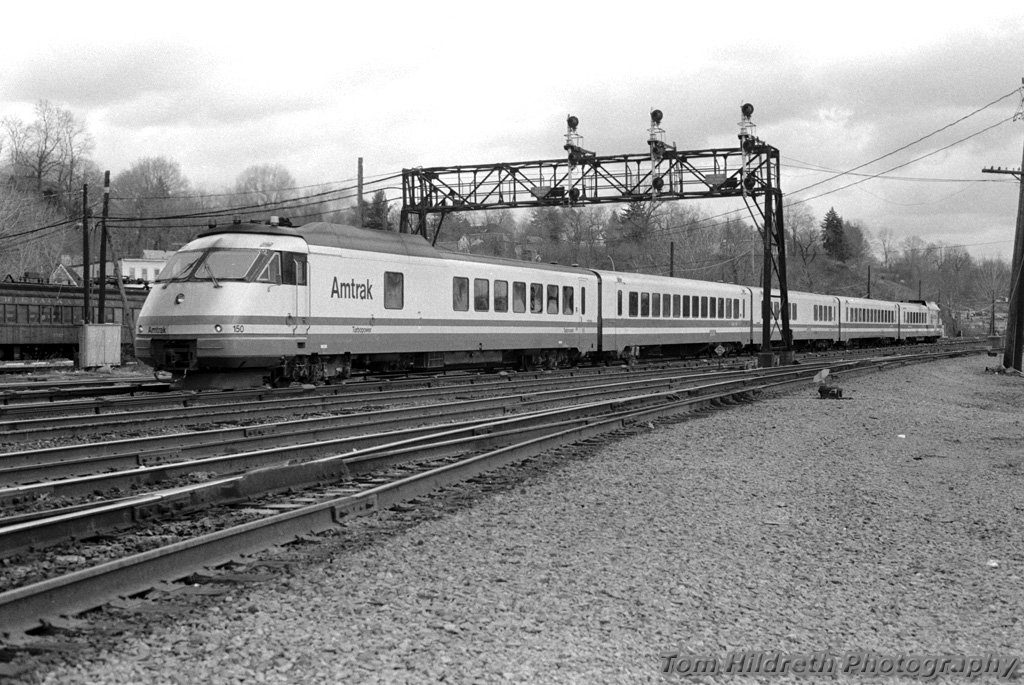 Amfleet southbound job with two AEM7 electric locomotives totalling 14,000 HP pass through Edison,NJ at 7:12 PM
on 13 May 1992.The locomotives are equipped with distincly different pantograph types, which connect the train's power units to the overhead wiring, or catenary. 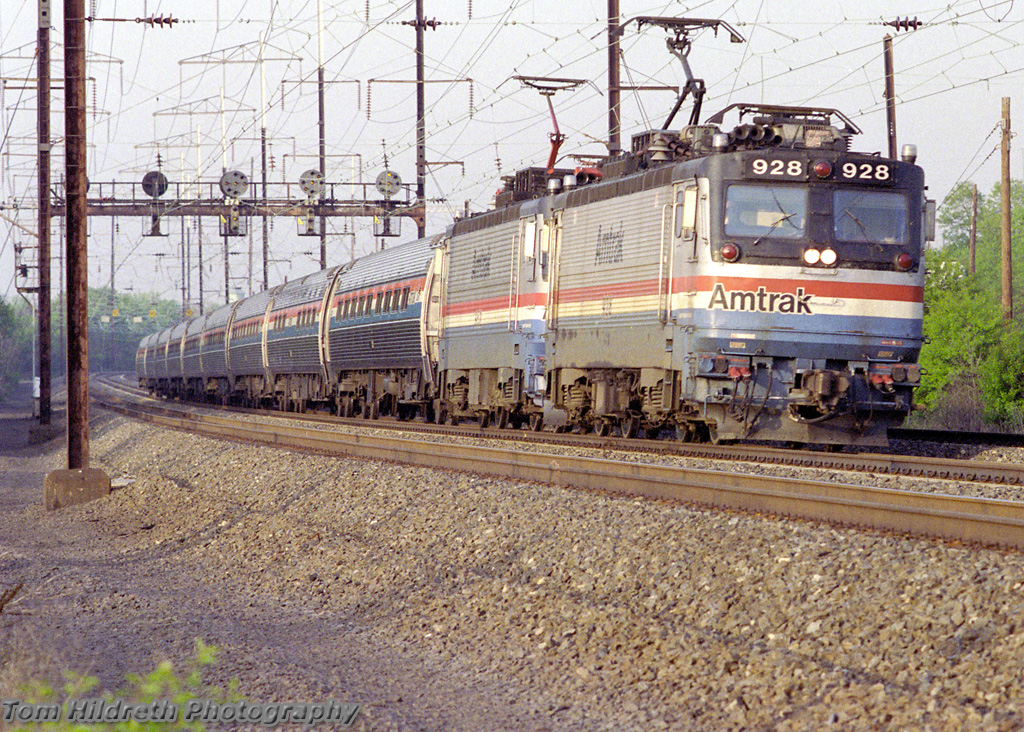 In February, 1978 I shot this Amtrak Turboliner traveling south along a very frozen Hudson River
south of Castleton-on-Hudson, NY. 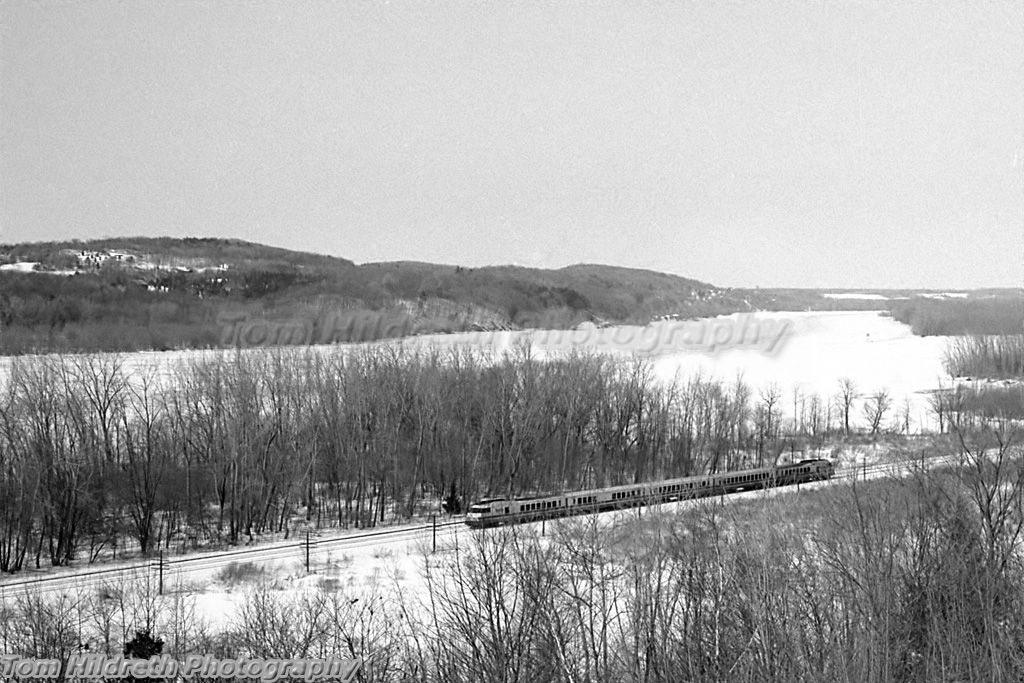 Amtrak train #48, the New York section of the "Lake Shore Limited" from Chicago departs the Peekskill,NY
station on 11 May 1992 at 11:50 AM. The train is headed for Grand Central Station behind FL9 diesel and
third rail capable locomotive #489. 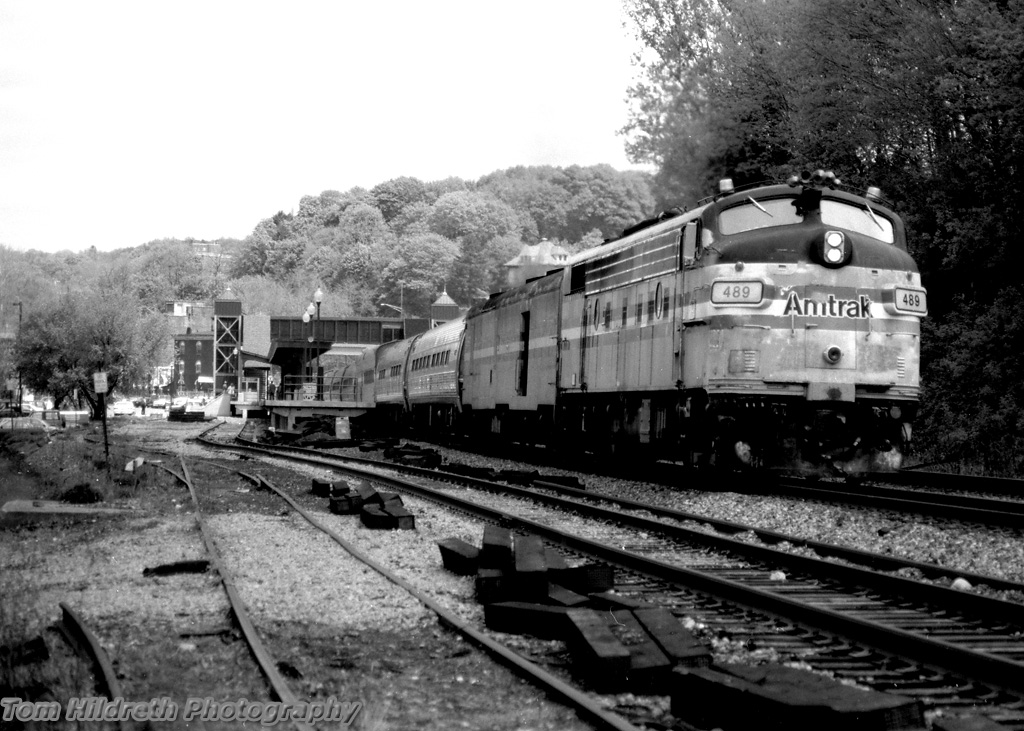 Two switchers descend the Berkshire foothills at Bancroft, MA., behind an F40 locomotive in an apparent motive power shuffle. 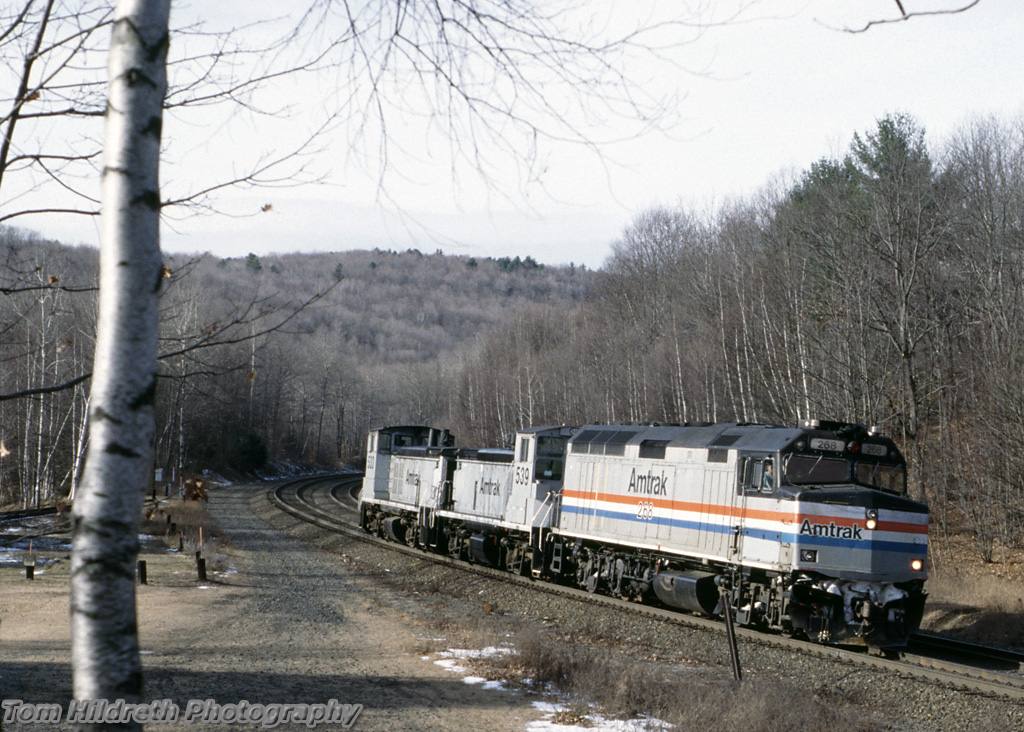 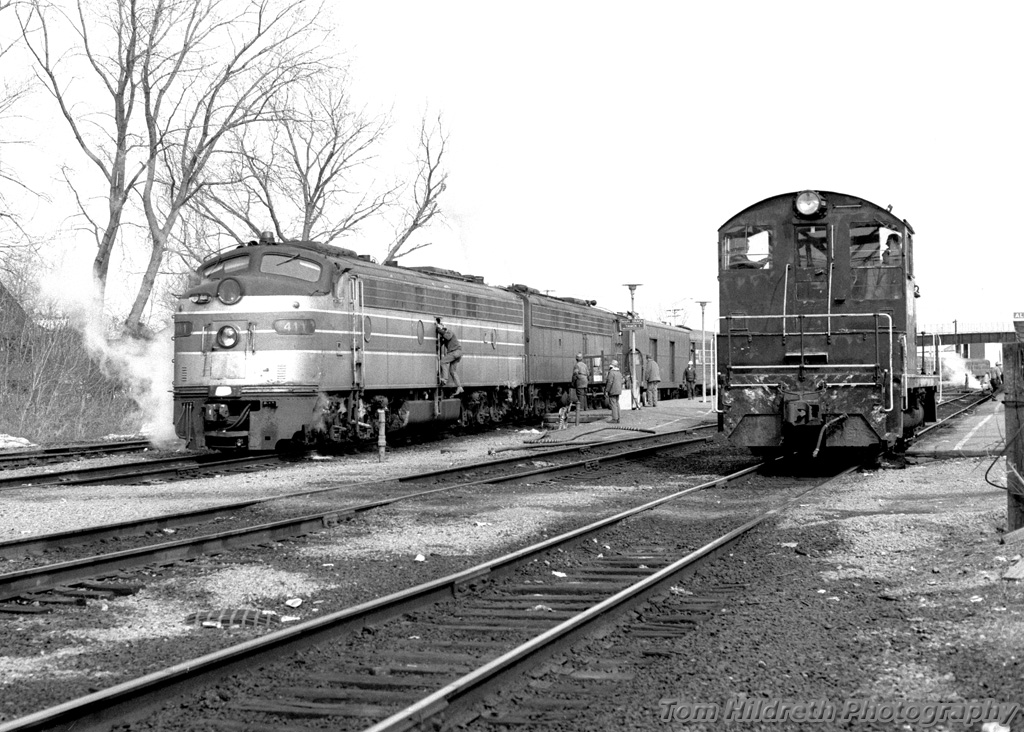 Amtrak train #448 eastbound at Palmer,MA., is looked over by the freight crew in the caboose of the Mass Central
local on the right. 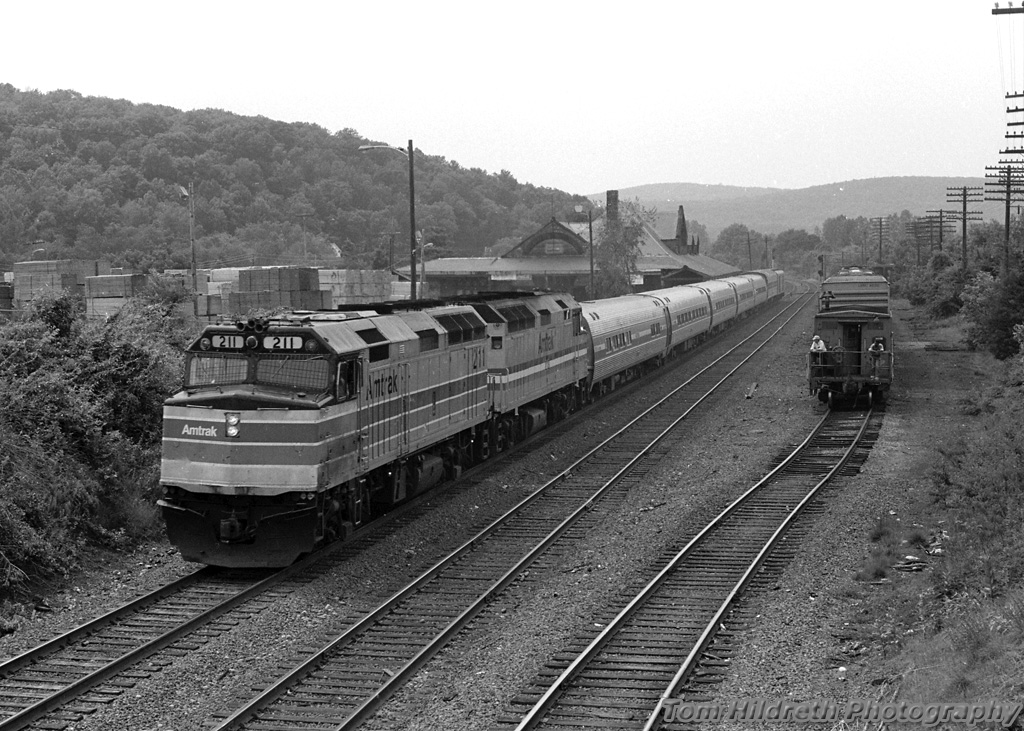 Amtrak train #448 with E8 units 458 and 454 on the A.H. Smith Bridge over the Hudson River. The new buildings of
the Empire State Plaza in Albany can be seen in the background of this shot taken on 20 November 1977. 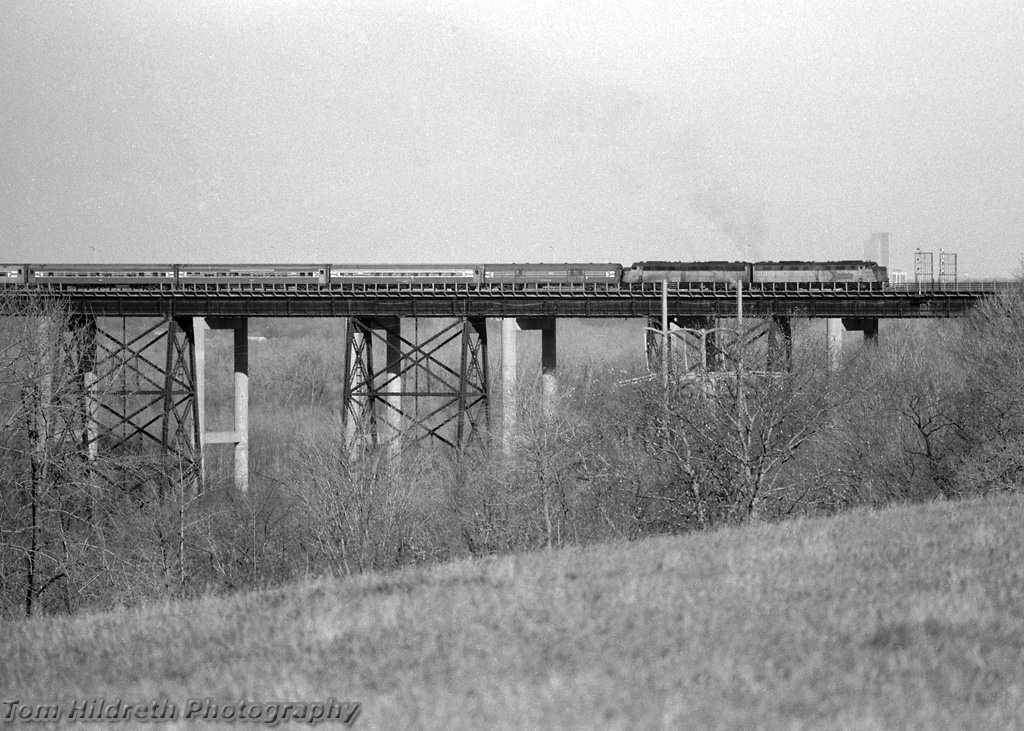